Not dead yet! And here’s what I’ve been up to… 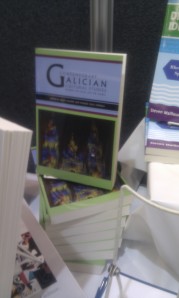 Gosh. It’s been a long time, hasn’t it? So, you’ll be pleased to know (I hope) that the post title is true. The blog and I are Not Dead Yet (look out – sound!); it’s just that various professional obligations have been keeping me busy and travelling – although my newly-acquired toy-cum-travelling-companion  means that my books have been on the road with me to A Coruña, Santiago de Compostela, Seattle (where I was excited to see the public début of a recent baby of mine, left), and Tenerife.

Time in the air = time for reading, and so I’ve got lots of reviews pending, including one of the book I picked up at the airport on the way back from Tenerife this week, Inma Chacón’s Tiempo de arena, the runner-up for the Planeta Prize 2011. It’s a total blast and – bonus! – set during my favourite decades at the beginning of the 20th century, which have been almost entirely ignored in Spain’s recent historical fiction boom, despite being one of the most exciting and dramatic periods in modern Spanish history. And you can betcha I have a theory about that. Watch this space!

Speaking of my favourite decades… perhaps the most exciting of the last few months’ developments is connected with The Project Formerly Known as From Cervantes to Sunny Spain, which now has a spiffing new title: The Edwardians and the Making of a Modern Spanish Obsession. I’ve talked here on the blog about some of the case studies I’ll be including in the book, from trashy fiction to travel writing, and there’s more on the way (!). If you want to know more, the project is currently featured on the website of the Leverhulme Trust, whose generosity in giving me a Philip Leverhulme Prize means I’ll be able to spend the whole of the 2012-13 academic year with the Edwardians.

Up next: news about my collaboration with Rod Younger’s fantastic new project Books4Spain, an online bookshop designed to help English-speaking readers locate the best books and resources about Spain in all of its rich and multilingual diversity.