The research for my current book, The Edwardians and the Making of a Modern Spanish Obsession, has turned up dozens of long-forgotten writers, commentators and artists who in their different ways, shaped the modern British view of Spain. Many of them were of Anglo-Spanish origin or had family connections that placed them at the heart of the international networks through which Anglophone knowledge about Spain was circulated. One of my favourites is Leticia ‘Lily’ Higgin who, under the gender-neutral semi-pseudonym of ‘L Higgin,’ wrote the almost-but-not-quite-forgotten study Spanish Life in Town and Country (left), first published in 1902.*

Higgin’s book was evidently popular in its time – it went through at least three editions (1902, 1904, 1906) and was read in the UK, the US and – as a passing mention in Sofia Casanova’s 1910 lecture La mujer española en el extranjero (The Spanish Woman Abroad) shows – in Spain. However, Higgin herself has remained something of an enigma – indeed, reviews from the time, which assume ‘L Higgin’ to be male, indicate that her identity was not widely known. In addition to Spanish Life, she also authored a number of articles on Spanish themes for the Fortnightly Review between 1904 and 1911, and between these and some genealogical digging, I’ve been able to establish the following skeleton biography: 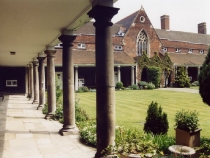 Leticia Higgin, known as Lily, was born in Lancaster on 20 November 1837, the twelfth and youngest child of Thomas Housman Higgin, a cotton merchant who later became deputy governor of Lancaster Castle, and his wife Sarah Winfield. The family was not wealthy (her father’s estate was worth less than £1500 when he died in 1861), and although Lily’s brothers all became comfortable as merchants, chemists and engineers, she and her sisters had to support themselves.** By 1881, she was Secretary at the Royal School of Art Needlework, where her sister Martha also worked as an Assistant;*** on both the 1881 and 1891 censuses, the two were living at the Bromley College for the Widows of the Clergy in south London (above, photo via the College website), where they had likely entered along with their widowed older sister Mary. By the turn of the century, Lily’s fortunes seem to have risen: by 1901, now describing herself as ‘Writer, novelist’, she had left Bromley for her own house, a neat semi-detached residence at 31 Norfolk Rd Maidenhead,  and by 1911, she was ‘of private means’ and occupying the 8-room property ‘Cintra’ at Furze Platt, Maidenhead, where she died on 30 November 1913, ten days after her 74th birthday.

Lily’s entree to becoming an authority on Anglo-Spanish matters was the marriage of her brother, architect George Higgin, to Elena Bertodano y Pattison (also known as Helen Pattison Higgin), London-born daughter of Ramón Bertodano, Marqués del Moral, and Henrietta Pattison.**** This, as she reminded readers of her first Fortnightly Review article, gave her a ‘personal acquaintance [that] goes back to the days before the Northern Railway was finished, and the journey from France was made by diligence, between Bayonne and Pampelona [sic]’ (‘Spain’ 625), setting her quite apart from ‘those people who go [to Spain] for two or three weeks to make a book!’ (‘Spain’ 641). This was Lily’s selling point in all her works on Spain: her longstanding knowledge of the ‘real’ Spain, which allowed her to position herself as an authentic authority, in contrast to the swarms of modern ‘Cook’s tourists’, who,

after a few days, or at most weeks, spent there … seem to imagine that they have discovered Spain, as Columbus discovered America, [and] deliver their judgment upon her with all the audacity of ignorance, or, at best, with very imperfect information and capacity for forming an opinion (Spanish Life 2).

According to Higgin, the ubiquity of these ill-informed accounts meant ‘that it too often comes to pass that visitors to Spain experience keen disappointment during their short stay in the country’ (Spanish Life 3). Her aim in Spanish Life is to provide an alternative source of information, thus enabling travellers

to hit the happy medium, and to draw from a tour in Spain, or from a more prolonged sojourn there, all the pleasure that may be derived from it, and to feel with those who, knowing the country and its people intimately, love it dearly’ (Spanish Life 3).

If Spanish Life was designed as an authoritative but easy read for potential tourists, Higgin’s Fortnightly Review articles provide evidence of a much deeper knowledge of Spanish literature, history and politics, and a keen awareness of Spanish commerce and current affairs. I especially like ‘Spain Yesterday and Today,’ which suggests the germ of a project to construct an Anglo-Spanish collective identity, creating a genealogy of memory that stretches from Higgin’s personal experience of the revolutionary Madrid of the 1870s, through her conversations with elderly British expats, back into the equally volatile 1830s. Through this conceit, Higgin juxtaposes the ‘Modern Madrid’ (caption of the photo from Spanish Life, above) seen by the ‘Cook’s tourists’ with the city’s previous incarnations, excavating the familiar sites and monuments to reveal the layers of history (and dirt) that challenge the popular beliefs about Spain then in circulation in early 20th-century Britain.

Of all these beliefs, Higgin is most concerned to challenge the ‘foolish parrot-cry, constantly repeated by two-weeks’ travellers in Spain’ that ‘Nothing ever changes in Spain’ (‘Spanish novelists’ 287). A common thread in all of her writing is that Spain, far from the backward, quasi-medieval country of the Romantic imagination, is a thriving modern society with a thriving modern economy. It has a thriving modern literature too: in ‘Spanish novelists of today’, she rejects the familiar Fernán Caballero, Pereda, Alarcón, Palacio Valdés and Pardo Bazán as ‘dull’ or didactic,  recommending instead Valera, Alas, Blasco Ibañez and Galdós, the last of whose historical Episodios nacionales ‘are simply invaluable to any reader who wishes to make acquaintance with the history of nineteenth-century Spain … they are still going on, still popular, and always valuable’ (‘Spanish Novelists’ 295). Despite her air of authority, Higgin herself wasn’t exempt from the occasional howler, referring in Spanish Life to ‘The lady who writes under the pseudonym of “Emelia Pardo Bazan”‘ (250) – a mistake picked up on by Sofía Casanova, who acidly commented to her Spanish audience that Higgin was clearly ‘poseedor [sic] de un secreto que ni sospechamos’ / ‘privy to a secret of which we have no notion at all’ (Mujer española 27).

Like her peers, including Rachel Challice, Annette Meakin and Catherine Gasquoine Hartley, Lily Higgin combined her direct experience of Spain and network of in-country contacts with a keen sense of professionalism: she was a well-read independent researcher who kept up to date with the latest current events, literature and scholarship and sought to disseminate her work to a variety of audiences. However, as a result of the institutionalization (and thus, inevitably, the masculinization) of British knowledge about Spain that was triggered by the establishment of Spanish as a university subject in the first decades of the 20th century, her life and works, along with those of a generation of mainly female Edwardian Anglo-Spanish specialists, have slipped out of view, along with their contribution to the body of our knowledge about Spain.

This is the first of an occasional series of mini-biographies that will make information about forgotten Anglo-Spanish Edwardians and their work available to new audiences. Requests, comments and suggestions are all very welcome, whether in the comments below or via the contact form above.

* The book included supplementary chapters on ‘Portuguese Life in Town and Country’ by Eugene E Street, author of A Philosopher in Portugal (1903).
.
** Winfield Higgin (1817-1890) emigrated to New Zealand; Edward Higgin (1819-1885) became an East India merchant in Liverpool, where he was responsible for one of my favourite census entries of all time, describing his weeks-old daughter Edith’s profession as ‘Sucking and sleeping’; James Higgin (1824-1885) became a manufacturing chemist in Manchester; Thomas Higgin (1827-1891) was a salt merchant and JP in Liverpool; John Higgin (1829-1880) left his Liverpool merchant house for Memphis, USA; George Higgin (1833-1892) was a civil engineer who spent much time with his wife’s family in Madrid. Of Lily’s sisters, only Mary (1818-1891) married, to clergyman David Stevenson. Martha (1821-1899)  and Sarah Anne (1830-1891), like Lily herself, remained unmarried and largely self-supporting.
.
*** In 1880, Higgin authored a Handbook of Embroidery for the School, which included colour illustrations by contemporary artists including Edward Burne-Jones, Walter Crane, William Morris, and Gertrude Jekyll.
.
**** George Higgin was the author of Commercial and Industrial Spain (London: E Wilson, 1886), a collection of essays earlier published in the Fortnightly Review that take a similar stance to Spanish Life in their promotion of a modernizing view of Spain, its culture and commerce.
.

← Newsflash! Free excerpts of María Dueñas’s new novel, Misión olvido, take over the web. How many can you find?
A note on the other (Spanish) North and South in Mrs Gaskell’s North and South (1855) →